Over the next few years billions of pounds are expected to be invested in new energy projects in the United Kingdom (UK). One of the projects may be a HVDC electric cable between UK and Iceland.

Earlier this year (2014), the UK government made Contracts for Difference (CfD) with eight renewable energy projects, with a total capacity of more than 4,500 MW. Five of these projects are large wind farms (more than 3,100 MW in total capacity) and the three others are biomass projects (close to 1,400 MW).

The list of participants e.g. includes the Danish energy firm Dong, Spanish Repsol, Scottish SSE, and Norwegian Statkraft and Statoil. The eight projects are expected to contribute around 15 TWh annually, which will be 14% of the expected renewable electricity to be added to the British electricity generation by 2020.

The investments mentioned above are possible due to the recently approved energy policy and electricity market reform of the UK. The recently adopted Energy Act calls for higher proportion of renewable energy and the strengthening of energy security of the UK by increased access to more diversified energy production. 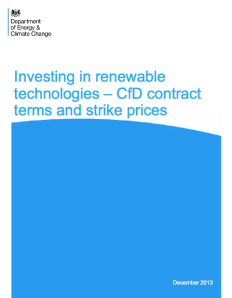 This is a very interesting step by the UK. The new energy policy introduces special Contracts for Difference (CfD) to replace earlier system of incentives. The CfD sets certain strike prices for electricity, which is a pre-defined long-term price. This system will substantially limit the risk of new power projects and be an important driver for projects giving access to more reliable power.

This may offer a variety of opportunities, such as for Icelandic engineering firms with geothermal expertise. Even more interesting, may be the possibility of a submarine electric cable between Iceland and Great Britain.

Nordic companies among the first to benefit

The new British energy policy and electricity market reform is already being implemented. It is an interesting fact that energy firms from the Nordic countries are the main players in four of the first eight projects involving CfD’s. These are the Danish Dong Energy and the Norwegian Statoil and Statkraft (the latter company is wholly owned by the Norwegian state).

All of the four “Nordic projects” are new offshore wind power parks, with a total capacity of close to 2,600 MW (CfD has also been awarded to a fifth wind park – Beatrice – with a capacity of 664 MW). The projects have gained authorization by the EU Commission, thus fully in consistency with competition and state aid rules. And the fixed strike price is 140-155 GBP/MWh (equivalent to approximately 220-250 USD/MWh).

The new investments, according to UK’s energy policy, will primarily be in new power plants and development of electricity transmission and distribution systems. In the coming months, the policy will be further developed and the UK Department of Energy & Climate Change (DECC) will continue to prioritize projects.

The CfD-system applies to energy projects in Britain. However, the British energy policy also focuses on special arrangements to increase UK’s access to energy and electricity from abroad. This will e.g. happen with new cable connections (submarine electric cables) between the UK and its neighboring countries.

For the UK it will be especially important to gain access to flexible hydropower, to balance the electricity system. A HVDC cable between Iceland and UK could be an important part of such balancing and create high value to both countries. Such a project would also attract the interest of private investors, as already can be seen on the website of Disruptive Capital.