Iceland is the greenest energy country in Europe 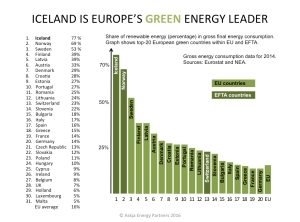 Probably not many of our readers are aware of the interesting fact that apart from the Scandinavian countries, Latvia is the greenest energy country in the European Union (EU). Only Sweden and Finland have a larger share of green energy in their gross energy consumption. However, the two greenest energy countries in Europe are Iceland and Norway (who are not members of the EU, but members of the European Free Trade Association; EFTA).

On the graph above you can see the share of renewable energy (percentage) in gross final energy consumption of each country within the EU and EFTA (the bars show the top-20 countries).

Have in mind that the average share of renewable energy in the gross energy consumption of all the countries within the EU is currently close to 16%. And EU has the official and binding goal of increasing this share to 20% no later than 2020. 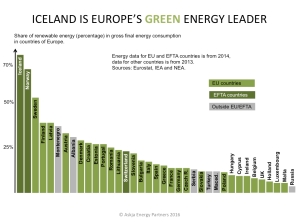 It is also worth noting that there are European countries outside of EU and EFTA that have very high share of renewable energy in their gross consumption mix (as can be seen on the graph at left). This especially applies to Albania (31%) and Montenegro (37%), which puts these countries in 6th and 8th place respectively (on the European list).