If IceLink subsea HVDC power cable will be constructed, it is expected that totally 954 MW of new traditional large hydro- and geothermal plants will be needed in Iceland. These power plants would be constructed during the next two decades. 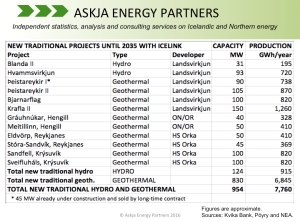 According to the Icelandic Master Plan for Nature Protection and Energy Utilization, the Icelandic government would most likely fulfill the increased demand by permitting the development of twelve new large hydro- and geothermal projects (as listed on the table at left). These are two hydropower projects and ten geothermal projects (or nine projects if Þeistareykir I and II would be defined as one project).

All these twelve projects are already defined in utilization-category in the Master Plan for Nature Protection and Energy Utilization. However, some of these projects are somewhat costly to develop when compared to all possible energy projects in Iceland (which means there are several cheaper options available, although today they are not classified as utilization-projects, by either classified as protected or on hold).

Recently, the Icelandic Energy Industry Organization and some of the power companies in Iceland started pushing for changes of the Master Plan, to have the Icelandic government and the parliament (Alþingi) to include several other lower-cost projects in the utilization-category (we will soon explain the cost-issues further, here at the Independent Icelandic and Northern Energy Portal). As several of the cheapest options for harnessing more hydro- or geothermal power are in environmentally sensitive areas, there will without doubt be strong opposition against major changes of the Master Plan.

If/when the IceLink project will go through, the total Icelandic power generation will have to increase enormously. Most of the new generation, or 7,400 GWh of the total increase of 12,800 GWh in annual production. would be added as exported power to the UK. In this same period (2015-2035) Icelandic general consumption of electricity is expected to increase by 1,700 GWh and power consumption by heavy industries in Iceland is expected to increase by 3,700 GWh. In total, Icelandic electricity generation would thus increase 68 percent in the period 2015-2035. For more on this subject, we refer to the table at left, and our earlier post from last July 22nd.