Icelandic electricity would be competitive in the UK

In a recent study, Bloomberg New Energy Finance (BNEF) assessed the political, technological and economic feasibility of an 1,100 km interconnector to bring green Icelandic electricity to the United Kingdom (the project is called IceLink).

According to BNEF, the prospects for implementation of such a project seem quite positive. All the technological and economic barriers regarding the IceLink are believed to be surmountable.

Regarding the economics , BNEF claims that the project is competitive in relation to other zero-carbon options. This for example applies to new offshore wind-farms in the UK and also to the recently agreed Hinkley Point C nuclear project. Electricity produced in Iceland and delivered in the UK, could be lower priced than the confirmed contract-for-difference (CfD) strike prices that have been confirmed for new renewable electricity projects in the UK (as announced by the UK Department of Energy and Climate Change; DECC).

The electricity from the IceLink would have a levelized cost of 86 GBP/MWh (close to 145 USD/MWh) as central estimate by BNEF. This number is based on BNEF’s analysis of the costs of high voltage direct current (HVDC) cable development and geothermal build-out in Iceland. In comparison, DECC’s announced strike price for electricity produced in the UK by hydropower is 100 GBP/MWh (165 USD/MWh), and 140-145 GBP/MWh (235 USD/MWh) for geothermal power. 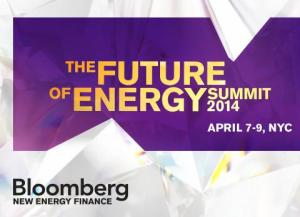 What is even more interesting, regarding the competitiveness of the green Icelandic electricity, is the UK strike price for electricity from wind power; 140-155 GBP/MWh (approximately 250 USD/MWh). Wind power is the UK’s major source for increasing renewable electricity. However, this technology is substantially more costly than buying electricity from Iceland via subsea cable. In addition, the wind power is very unstable, while the Icelandic hydro- and geothermal power is a very stable power source. Thus, the cable could be excellent business for the UK. At the same time it could create strong new export revenues for Iceland.

On January 16th 2014, Startup Energy Reykjavík was presented by their founders in an open day meeting at the headquarters of Arion Bank in Reykjavík.

Focused on energy related business, Startup Energy Reykjavik is a mentorship-driven seed stage investment program with a strong focus on energy related business ideas. Startup Energy Reykjavik is a first of a kind program in Iceland. It offers a unique opportunity for entrepreneurs, not only to develop their ideas, but also to network with others in the energy business.

The program is open to different ideas related to the energy-field. Projects include company research or prototype development. International applications In business are highly valued. Early stages ideas are also welcomed to apply. 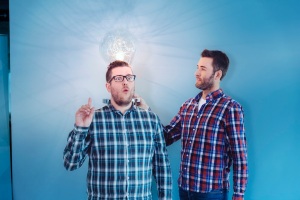 Applicants are welcome from companies, groups or individuals. Applications are open until February 16th. The top twenty ideas will then be pre-selected by February 20th followed by the selection of the final seven on February 27th. The project is scheduled to start March 10th.

As announced on the website of the program, finalists will receive USD 40,000 in seed funding. The program runs for 10 weeks, participants working 3 days a week at the facilities provided at the University of Reykjavik (including weekly mentor meetings with the program founders).

Startup Energy Reykjavik was founded by Landsvirkjun, Arion Bank, GEORG and Innovation Center Iceland in December 2013. The program is facilitated by KlakInnovit and Iceland Geothermal. Further information can be seen on the program’s website.

UK will import more power from neighbouring countries in the future 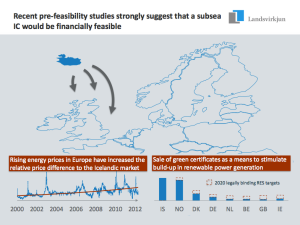 According to the UK National Grid, the UK will import more power from neighbouring countries in the future as the country’s electricity margin continues to tighten. The Financial Times recently wrote about how one of the new subsea electric cables to be constructed is likely to be a cable between UK and Iceland (sometimes referred to as the IceLink): 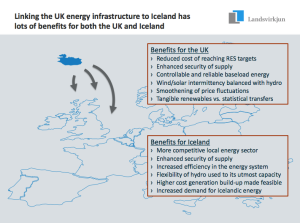 Net electricity imports cost the UK about GBP 365 millions in the past six months of 2013, two and a half times more than two years previously, according to data supplied by ICIS, the price reporting agency. Electricity imports can be cheaper than those produced by UK suppliers and are a small but growing part of the country’s overall power supply. Power is produced in France and the Netherlands and imported via subsea interconnectors. Electricity flows both ways but the UK currently buys more than it sells. And there will be a rise in Uk’s power imports, says Andrew Bonfield, National Grid’s chief finance officer .“[This is] because there is a pricing differential which we believe will be beneficial to the country, and ultimately customers.”

National Grid will invest about GBP 3.5 billion this year, most of which will go towards reinforcing its UK transmission infrastructure. Power imports should help National Grid level out peaks and troughs from renewable energy production and deal with the UK’s diminishing electricity margin, which represents the safety cushion of spare power generating capacity (National Grid previously said that the electricity margin during peak demand in cold weather will be 5 per cent, down from more than 15 per cent in the winter of 2011-12). IceLink could become an important part of this strategy, opening access to Iceland’s 100% renewable power geothermal- and hydro power generation.

The two illustrations above are from a presentation by Mr. Hörður Arnarson, CEO of the Icelandic Power Company Landsvirkjun, presented in August 2012.