Geothermal developer Reykjavík Energy (Orkuveita Reykjavíkur in Icelandic) is facing problems due to fast declining geothermal wells. To keep up the power generation in its recently constructed 303 MW Hellisheiði Power Station, the company will need to invest close to USD 175 million in geothermal wells in the next six years.

Iceland’s current geothermal capacity is 665 MW. The Hellisheiði station is one of five large geothermal power plants in Iceland. There are additionally two very small geothermal plants, so there are seven geothermal stations in total.

In addition, Landsvirkjun is currently constructing the first phase of Þeistareykir geothermal station in Northeast Iceland (45 MW). With a further second phase at Þeistareykir, which is expected to be developed soon after the first phase will be ready, the Þeistareykir plant will have a capacity of 90 MW. And a total cost of EUR 250 million (equivalent to USD 280 million).

Running out of steam

Reykjavík Energy does not only plan to drill for more steam for the Hellisheiði geothermal station, but also the company will spend close to USD 44 million during next six years in pumping water back into wells (to uphold steam). Thus, in total it will cost the company close to USD 263 million to withhold the power generation of the Hellisheiði station – during the next six years. It is noteworthy that this amount is almost as high as the total cost of building Landsvirkjun’s new 90 MW Þeistareykir station. 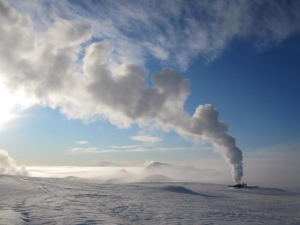 The falling production at the Hellisheiði geothermal station is a reminder of the risk which developers of geothermal power face. Despite extensive research before construction, it is always very important to limit the risk of possible declining steam by developing geothermal power in fairly small steps. In Iceland, it is now generally accepted that each geothermal step should not be larger than 50-100 MW.

Developing geothermal power in small phases offers important information and data about the field. Such a methodology strengthens predictions of how much energy the area can deliver in a sustainable manner. Unfortunately the 303 MW Hellisheiði project was developed without necessary precaution, resulting in unsustainable generation.