Power tariffs to aluminum smelters in Iceland are among the lowest in the world. 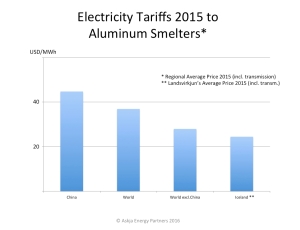 Due to low aluminum price in 2015, electricity price to aluminum smelters declined in most parts of the world during 2015. The world average smelter power tariff fell by 12% in 2015, according to CRU Group. This drop can primarily be attributed to a 15% drop in China’s average power tariff. The average power tariff in the World excluding China also fell in 2015, decreasing by 8.2%.

The average power tariff to smelters in Iceland also declined in 2015, although the decline was less than in some other areas of the world. The result was that during 2015, the average electricity price from Icelandic power company Landsvirkjun to the aluminum smelters in Iceland, was approximately 2/3 of the world average tariff to such smelters.

We already have subsea HVDC power cables being constructed between Norway and the United Kingdom (UK) and between Norway and Germany. These cables will be 700 km and 570 km, respectively. And now one more major connector if this kind is planned in the area, between UK and Denmark. That cable is referred to as Viking Link, will be 650 km long. 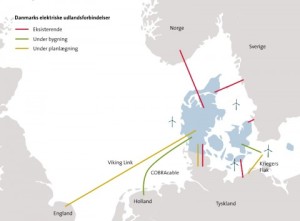 Viking Link is expected to have a capacity of up to 1,400 MW. Recently, the Danish Transmission System Operator Energinet and the UK National Grid decided to launch a tendering process for the examination of the seabed between the two countries. Both companies have expressed their strong believe in the positive effects of such a power connection, which will open up possibilities to harness more wind energy at competitive prices. The successful tenderer will carry out geophysical surveys and sampling to pinpoint areas of environmental and archaeological interest and help identify the best route for the marine cables and suitable landing locations.

For the UK, the main advantage of Viking Link would be in the access to more power, at the same time as that power will mostly be generated by harnessing renewable sources. For Denmark, the cable will open access to much larger market for Danish wind power. The plan is to take the final investment decision no later than in 2018. The cable could then become operational about four years later or 2022.