Iceland produces substantial share of its electricity by harnessing geothermal resources. Geothermal plants now account for approximately one-quarter of all electricity generated and consumed in Iceland.

Several European countries are also looking towards geothermal heat as a source for electricity production. This for example applies both to Germany and Britain. However, these countries do not share Iceland’s  geophysical conditions and low-cost geothermal electricity is not an option unless you have access to very high temperatures, .

In Iceland, geothermal electricity generation is only considered feasible in areas where geothermal heat is at least 200°C  at a depth that is less than 1,000 m. This applies to many areas within the orange zone on the map above. Outside of this zone the heat is lower and more similar to what can be found in several areas in Europe.

Countries like Germany and Britain are building geothermal power plants in low-heat areas that would not be consider competitive in Iceland. However, it is understandable that European countries want to harness even their low geothermal heat for electricity generation. Wind energy is also an expensive option and so is solar energy (whether PV or CSP). There simply are very limited low-cost options available in European renewable generation.

Interestingly, it may be an excellent option for European countries to harness their low geothermal heat for central heating rather than generating electricity. This is an area of expertise where Iceland has great strength. Iceland has a long tradition harnessing low geothermal heat for central district heating, which explains why geothermal is such a large share of the primary energy use in Iceland (as can be seen on the chart above).

Recently, Icelandic engineering firm Mannvit exported this know-how to Hungary. There, the company provided engineering, procurement, and construction management of a geothermal district heating plant in the town of Szentlőrinc in the southwestern part of the Hungary.

The plant provides heating and hot water for some 900  homes in Szentlőrinc, and has excess capacity for further expansion. This new geothermal plant replaces the town’s natural-gas powered district heating system with environmentally-friendly and sustainable geothermal energy. 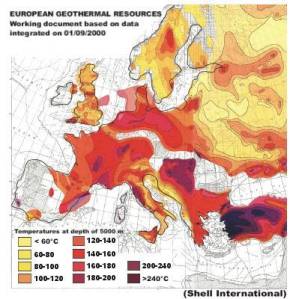 This type of geothermal harnessing is an option that could be interesting for many communities in numerous countries in Europe. In addition to Hungary, this for example applies to Germany, France, Slovenia and several other countries.

In a nutshell, geothermal is a resource Europeans should consider very seriously for district heating. This especially applies to local communities, taking an initiative not only towards more renewable energy but at the same time greatly  improving peoples living conditions. Instead of focusing too much on wind and solar and renewable electricity generation, governments need to understand and realize the multiple potentials of geothermal.

From: About Iceland, Engineering and Technology, Geothermal Power
← The United Kingdom and Icelandic electricity
The Iceland-Europe interconnector →