The glacial river system of Þjórsá and Tungnaá rivers in South Iceland is a major source for Icelandic hydropower.

Current capacity of the five power stations in those two rivers is 840 MW, with an annual generation of more than 5,000 GWh. The sixth power station in Þjórsá-Tungnaá, Búðarháls Station, will start operating in late 2013. It will have an installed power capacity of 95 MW and every year it will be generating 585 GWh. Then, the total annual generation in Þjorsá-Tungnaá will be close to 5,600 GWh.

All these six hydropower stations are owned and operated by Iceland’s largest power company; Landsvirkjun. In addition, Landsvirkjun is considering to construct three more power stations in Þjórsá river. Those three stations would have a combined capacity of 265 MW, adding more than 2,000 GWh of power generation per annum.

The Búðarháls Power Station received a positive assessment of environmental impact already in 2001 and construction commenced in November 2010. The electricity from the Búðarháls Station has already been sold to the aluminum smelter of Rio Tinto Alcan in Straumsvík in Southwest Iceland. The smelter in Straumsvík has 40 years successful operating history and the electricity from Búðarháls Station will be used for substantial increase in its aluminum production. 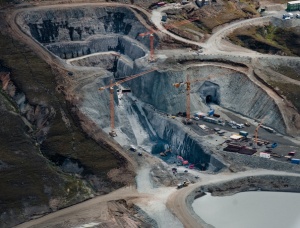 The project at Búðarháls includes a new 6 km² intake reservoir, Sporðöldulón, created with a 2.1 km long dam just below the Hrauneyjarfoss Power Station. A 7 km long 220 kW transmission line will be erected from the new power station to the Hrauneyjafoss line to connect Búðarháls Station with the National Grid.

It is worth having in mind that besides the three additional power stations Landsvirkjun is preparing in Þjórsá, as mentioned above, the company is considering several other attractive hydro- and geothermal power projects. Currently, Landsvirkjun is offering new power contracts that probably are the best offer available in all Europe. The company is offering a fixed real rate of $43/MWh in 12 year contracts.

In addition to the very competitive price, all the electricity Landsvirkjun produces comes from harnessing renewable power sources. No less important is the fact that all the Icelandic power stations are known for their excellent reliability – and the same applies to the Icelandic transmission system. This has been confirmed in numerous international reports, where Iceland’s electricity supply is ranked among world’s most secure (see for example IMD’s and WEF’s World Competitiveness reports).