In Iceland, the company Carbon Recycling International (CRI) is currently constructing an industrial plant at Svartsengi in Southwestern Iceland, for producing green methanol. 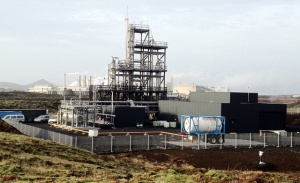 Methanol is one type of alcohol fuel that can be used as alternative fuel in gasoline combustion engines, either directly or in combination with gasoline. If it is used as low blend in gasoline, very little or even no modifications of the engine are needed.

It is not yet clear if this Icelandic green methanol will be blended in low quantities (maximum of three percent) in gasoline or if it will be a used as stronger methanol blend by flex-fuel vehicles. One more option CRI has, is to is to export the methanol. CRI has also launched a feasibility study with the Icelandic public waste firm Sorpa on making green methanol from household waste.

Methanol production by CRI can be related to the ideas of Nobel-prize winning chemist George Olah, who has introduced the possibility replacing fossil fuels with methanol rather than the more highly publicized hydrogen or ethanol. Unlike hydrogen, methanol can be transported and distributed via existing gasoline infrastructure. CRI’s geothermal-connected plant in Svartsengi, Iceland, goes by the name the George Olah Renewable Methanol Plant.