Last Thursday, the Icelandic power company Landsvirkjun started the operation of two wind turbines close to the Búrfell Hydropower Station in Southern Iceland. These are the first large wind turbines in Iceland.

The wind turbines each have a 900 kW capacity (1.8 MW of installed power in total). Together their generating capacity could be up to 5.4 GWh per year. The masts reach a height of 55 metres and each spade measures 22 metres in length. When the spades are at their highest position the unit will achieve a height of 77 metres.

The turbines operate at or around full capacity at wind speeds of 15-28 m/sec. Below 3 m/sec and above 34 m/sec, electricity generation stops. They connect to an 11kV underground electric cable running along a road towards Búrfell Hydropower Station. All additional electricity- and data cables are underground, in order to minimize environmental impact. 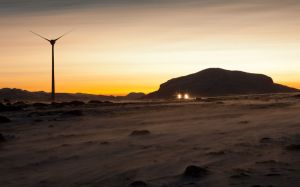 The turbines are located in an area with quite stable winds, with medium wind speed of  10-12 m/sec (stronger in winter than summer) at mast height (55 m). The towers and equipment were erected in last December (2012). Since then, Enercon has carried out and completed necessary tests for the project. Now the project has been handed over to Landvirkjun, and the turbines formally started operating. Their generation can be followed in real time at Landsvirkjun’s website.

There are a number of areas in Iceland that show great potential for the successful utilisation of wind energy. The project is part of Landsvirkjun’s research and development project on the advantageous of wind power in Iceland. The main objective of the project is to obtain operational experience with wind turbines far inland and in the Icelandic climate. Various climatic studies will be carried out during operation, including wind measurements and research on icing, the impact of snow, ash and soil erosion as well as the effects on birds and other wildlife.

It is also of nterest, that the Icelandic Meteorological Office, Landsvirkjun, the Icelandic Icelandic TSO Landsnet and the University of Iceland are all participants in a special research project called Icewind ,supported by the Nordic Top-level Research Initiative and the Nordic wind energy industry. The project objectives, related to offshore wind, include resource mapping near Iceland and improved land-wind resource map such that full-scale studies can be carried out on the integration of hydro- and wind power in Iceland. This may offer new and very economical opportunities to increase renewable electricity generation in Iceland.