Iceland is the world largest energy consumer (per capita) 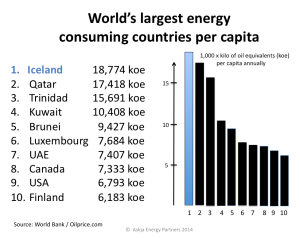 The list is based on the most recent data available from the World Bank on energy used per person, measured in kilograms of oil equivalent (koe). The koe is a measurement of the units of energy equal to what’s generated by one kilo of crude oil per capita (the US Energy Information Agency also present comparison of this kind, but uses British thermal units or Btu). All types of energy can be broken down to koe, no matter what is the source of the energy, such as fossil fuels, nuclear energy, renewable energy etc. Note that when comparing energy consumption per capita, the World Bank refers to to indigenous production plus imports and stock changes, minus exports and fuels supplied to ships and aircraft engaged in international transport-use of primary energy before transformation to other end-use fuels, which is equal.

To most of our readers it is probably a quite well-known fact that people and companies in North America are among the world’s greatest oil and energy consumers (USA has only 5% of the global population but uses close to 20% of the global energy used each year). And it is certainly true that USA and Canada are among the greatest energy users. However, they only come as number eight and nine on the top-ten list of the world’s largest energy consuming nations per capita. The list is as following:

Here we are not going to explain in details the reasons why the top-ten countries consume so much energy. However, it is quite clear that one of the main reason for scoring high on the list is a mixture of abundance of low-cost energy resources and fairly low population (at least this applies to the top-seven countries on the list). And the abundant domestic energy resources are fossil fuels and/or hydropower; the most economic energy sources we have access to here on our planet.

Many of the countries on this top-ten list are among the world’s largest producers of oil and gas. In some of these countries, the prices for the fossil fuel products are very low, resulting in more consumption than in countries were the prices are higher. This may, for example, apply to gasoline prices and to prices for electricity generated by burning natural gas. In addition, many of the counties in the list have major energy intensive industries (like aluminum smelters and LNG industry). These industries use cheap domestic energy resources, like electricity generated by natural gas. The result is very high energy use per capita in countries like Qatar, Trinidad and Tobago, Kuwait, Brunei and UAE (note that when using less recent numbers than Oilprice does, Trinidad and Tobago and Qatar switch the 2nd and 3rd place, as can be seen on the chart from Gapminder below; for other sources note IEA/NationMaster and OECD).

So fossil fuels bring many of the Persian Gulf states on the top-ten list, plus Brunei and Trinidad and Tobago. Luxembourg, however, is one country on the list which is heavily dependent on energy imports. Thus, Luxembourg’s high energy use per capita can not be explained by access to abundant and cheap energy sources. The high ratio of energy use in Luxembourg has been partly explained by the low sales taxes on petroleum products, which encourage motorists and other consumers from neighbouring countries (Belgium, France and Germany) to buy their supplies in Luxembourg.

Interestingly, countries with huge energy resources do not necessarily make it to the top-ten list. This, for example, applies to Norway, which has both enormous oil- and gas resources and is a major producer of hydropower. Still, Norway is not on the top-ten list of the largest energy users per capita (although it comes very close).

USA of course has a long history of being an industrial giant, utilizing its large coal and natural gas resources and is one of the main oil consuming countries in the world (even per capita). For the USA, nuclear power and hydropower is also of great importance as sources of energy. Same applies to Finland, which has very substantial energy intensive pulp and paper industry. The same can be said about Canada, which also has a large aluminum industry.

This, with Iceland’s large fleet of fishing vessels and high automobile ownership, are the most important reasons for why Iceland is the world’s largest energy user per capita. But keep in mind that very high share of Iceland’s energy comes from renewable sources, making Iceland one of the greenest country in the world with regard to energy consumption. In total, approximately 86% of Iceland’s consumption of primary energy comes from renewable sources. And what is especially interesting, is the fact that Iceland still has access to numerous competitive renewable energy sources yet to be harnessed.