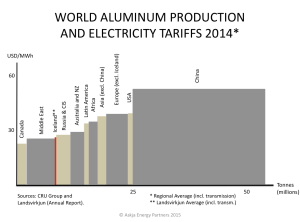 China has become the world’s largest aluminum producer. This is an interesting fact, not least when having in mind that the smelters in China pay on average much higher electricity tariffs than smelters elsewhere in the world.

However, the average price to aluminum smelters in Iceland is likely to increase substantially in the coming years – when major contracts are up for renegotiation.  Next such power contract is a contract between Landsvirkjun and Century Aluminum, regarding the Norðurál Smelter at Grundartangi. The present contract expires in 2019.