In their recent report titled “Subsea electric cable between Iceland and Britain – cost-benefit analysis”, Kvika bank and Pöyry seem to overestimate how fast Icelandic geothermal power can be developed. In their central-scenario, having regard to new demand from the IceLink subsea power cable, Kvika and Pöyry predict that by 2025 Iceland may have developed 820 MW of new geothermal capacity. This is somewhat surprising estimation, as it seems unrealistic to expect such a fast construction of new geothermal plants in Iceland. 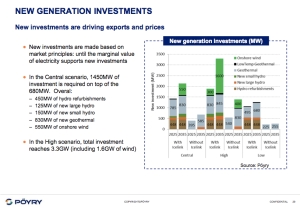 The rest of the needed capacity by 2025, around 596 MW, is expected to include 448 MW in hydropower refurbishment (such as added capacity in current hydro stations), 93 MW in new large hydropower plants, and 55 MW in new small hydropower plants. Note that the exact predicted megawatts for each category are not absolute figures, so for each category there may be a few more or less MW. Thus, it is maybe not very surprising that the given figures in Pöyry’s slide-presentation for hydropower refurbishment, do not quite match (450/448), as can be seen on the graphs and also here on Twitter.

Iceland offers very good geology for geothermal power development. However, it is costly and complicated to sufficiently establish and harness the geothermal resource in each new area. Having regard to the Icelandic experience in geothermal development so far, 785 MW of new large geothermal power stations may call for approximately eight to ten new development areas, each area with close to 100 MW of power capacity constructed in preferably two steps (starting with 50 MW or so).

There may be some possibilities to construct new Icelandic geothermal stations with 100 MW capacity before 2025. However, such an intensive construction/utilization in a new area could substantially increase the risk of over-exploitation of the geothermal area. And it is also important to have in mind that due to environmental regulations, such as regarding planning and impact assessment, it becomes even more unlikely that up to ten new geothermal projects can be developed in Iceland in less than a decade.

This does not mean that Iceland would not be able to deliver the power needed for IceLink in time. Due to well-known hydropower opportunities and good wind potentials, economical wind- and hydropower (in addition to substantial new geothermal power) would most likely ensure sufficient power supply for IceLink. But the scenario for each power category (geothermal, hydro, and wind) will most likely be somewhat different from what Kvika/Pöyry estimate.

For some reason, Kvika/Pöyry made little effort to cost-analyze the development of wind power in Iceland. Having regard to numerous good sites for high-capacity wind farms in Iceland, it can be argued that wind power can fill in the gap which may occur due to slower than expected development of geothermal power. In our next article, we will be looking further into this issue, explaining how much wind power may be developed in Iceland in the coming decade.