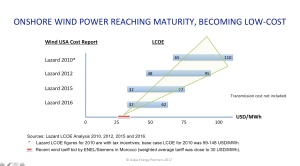 The competitiveness of new wind power has been increasing rapidly. According to Lazard, the levelized cost of energy (LCOE) from onshore wind power in USA, is approximately 50% lower now than it was four years ago, and the lowest cost onshore wind projects now have a LCOE that is 33% lower than it was four years ago. As can be seen on the graph at left.

The lowest cost wind projects in the USA now have a LCOE of 32 USD/MWh. The lowest cost projects are mainly wind farms in the US Mid-West, where wind conditions are good, resulting in a high average capacity factor. And even though the lowest cost was steady (did not decline) between 2015 and 2016, new very large wind farms can be expected to offer even lower cost than 32 USD/MWh. For example, Morocco did receive average bids from Enel and Siemens of 30 USD/MWh from its tender for totally 850 MW wind energy projects (with the lowest offer at around 25 USD/MWh). 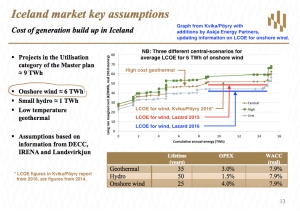 For the Icelandic energy sector, it is interesting to compare the figures in the reports from Lazard on LCOE, with a recent report by Kvika bank and Pöyry. In the report by Kvika/Pöyry the LCOE for up to 6 TWh of new onshore wind power in Iceland is set at a fixed price (LCOE) of approximately 51-52 EUR/MWh. This is quite close to the average LCOE for onshore wind in USA as assumed by Lazard in 2015 (shown with red line on the graph at left).

When having regard to Lazard’s most recent report, from December 2016, it becomes obvious that the LCOE for onshore wind has declined further (the blue line on the graph shows Lazard’s average for onshore wind in its report from 2016). What then becomes especially important, is that now new onshore wind projects in Iceland can be expected to be even more economical than new geothermal projects. For more information on this issue, we refer to our earlier post on the subject.

From: Energy Data, Wind Power
← The most surprising energy fact?
Hellisheiði geothermal plant to be sold? →