Electricity tariff to Elkem could double

With close to 1,100 GWh annually, the ferro-silicon plant of Elkem in Iceland is the 4th largest power consumer in the country. The power is supplied by the state-owned power firm Landsvirkjun. Elkem is a Norwegian firm, owned by China National Bluestar Group.

Current power contract of Landsvirkjun and Elkem was agreed two decades ago, at times when heavy industries were offered very low tariffs when locating in Iceland (as for example advertised in a brochure from the Icelandic government in 1995; note cover at left). The power contract is valid until 2019. Elkem and Landsvirkjun have still been unable to reach a new agreement, so it is not certain if Elkem will continue its Icelandic operations after 2019.

The most likely scenario seems to be a new contract where the power price will align with the market price on the Nordic electricity market (Elspot on NordPool Spot), as was the result in recent negotiations regarding the Norðurál aluminum smelter owned by Century Aluminum. According to current prices, this would result in approximately doubling of the electricity tariff paid by Elkem in Iceland.

Elkem buys 8% of the energy, but pays only 5% of the revenues

Most of the revenues from the electricity sales of Landsvirkjun are derived from the aluminum smelter of Rio Tinto (ÍSAL) in Straumsvík, which supplies Landsvirkjun with close to 1/3rd of it revenues although the smelter purchases only 1/4th of Landsvirkjun’s production. 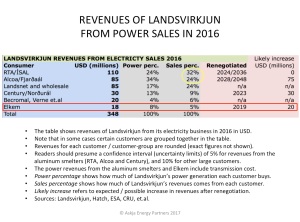 The sales to Elkem alone amount to about 8% of Landsvirkjun’s electricity sales, ie. when based on the amount of electricity. Although this is not a very high percentage of the total electricity generated by Landsvirkjun, it is of course important for the power firm to obtain increased revenues from Elkem, as Elkem now only returns about 5% of the income of the company. Actually the percentage for the net-income is even lower, as the power tariffs to heavy industries include the transmission cost (this part of Landsvirkjun’s revenues is forwarded to the TSO).

Power tariffs not to be lower than in Norway or Canada

Elkem has been paying the lowest electricity price of all the industrial companies in Iceland. The CEO of Landsvirkjun has previously said that the current tariff Elkem pays reflects very different economic environment from now, indicating that a sharp increase in the power price would be absolutely normal. Earlier this month (November 2017), the CEO also pointed out that now “there is no reason why the price of electricity should be lower in Iceland than in the markets of [Canada and Norway].” This is a very clear statement, expressing that Elkem may be able to get a new contract where the power price will be aligned to the market price in Norway or Canada, but not lower tariff than that.

In 2016, Elkem paid Landsvirkjun close to USD 18 million for the electricity (estimates by Askja Energy Partners). In a new contract that would come into effect in 2019, Landsvirkjun is probably aiming for a tariff that would mean extra USD 20 millions added to Elkem’s power bill. The total annual power cost of Elkem would then rise to approximately USD 38 millions (those figures include the transmission cost).

As it is possible and even likely that Elkem’s new tariff will be linked or aligned to the Elspot price on the Nordic power market, the power price would of course fluctuate. The given figure of USD 38 millions assumes that the Elspot price will be close to 30 EUR/MWh. If/when the price will become higher, the tariff of Elkem would rise. Probably the only option for Elkem to receive a more positive tariff for the company in Iceland after 2019, is to expand its operations in the country. For example it will be interesting to see if Elkem offers Landsvirkjun and the Icelandic government to move some of its solar-silicon production from Norway to Iceland.

NB: All figures on revenues in the table above are approximate / rounded. More precise figures are available only to customers of Askja Energy Partners.