The Icelandic electricity generation capacity and production has more than doubled in a decade. Today, the total capacity is 2,669 MW. The annual generation 2011 was 17,210 GWh. 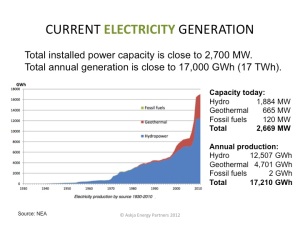 Close to 100% of the electricity generation in Iceland is produced by harnessing renewable sources. Hydropower is the largest source with close to 73% of the annual generation. Geothermal accounts for about 27% of the generation. In addition, there are a few fossil fuel generating plants.

Several new power stations are under planning (both hydropower and geothermal power). The most recent one (now being constructed in South Iceland) will become operational in late 2013 . 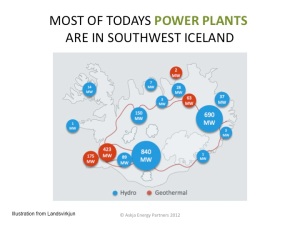 The power stations in Iceland are located all around the country. The geothermal power plants (marked by red on the illustration at left) are of course to be found where it is easiest to harness the geothermal heat for electricity generation. All the main hydropower stations utilize glacial water, flowing from Iceland’s glaciers.

The largest hydropower system is the Þjórsá and Tungnaá river system in Southern Iceland (marked by a large blue dot on the map at left) . However, Iceland’s largest power station is in the Northwestern part of the country. This is the 690 MW Fljótsdalur / Kárahnjúkar hydropower plant, that started operating in 2007 (marked on the map by the large blue dot north of Vatnajökull Glacier). 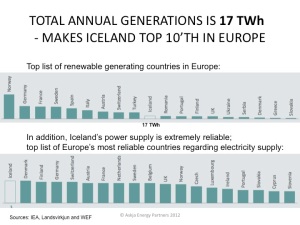 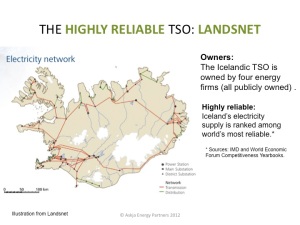 Despite Iceland’s isolated electricity market and sometimes severe weather conditions, the electricity supply in Iceland is renown for its reliability (see for example IMD’s and WEF’s World Competitiveness reports). This high reliability is the result of Iceland’s large reservoirs and the solid transmission system, which is operated by the Icelandic Transmission System Operator or TSO (Landsnet). The TSO connects all the large power stations to the Icelandic electrical grid, which runs around the country (all the nation lives in the lowlands, with the majority located in Southwestern Iceland).