Overview of the Icelandic energy business

There are three main energy companies in Iceland: 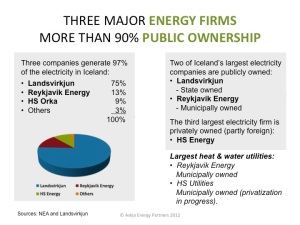 State-owned Landsvirkjun is by far the largest Icelandic energy company, providing approximately 75% of all the electricity produced in Iceland. Landsvirkjun is responsible for more than 96% of all hydro generation in Iceland, and its share in the generation of electricity from geothermal power is around 11% of the total. Most of the electricity Landsvirkjun generates (80%) is sold to energy intensive industries via long term contracts. The remaining 20% is bought by public utilities and the Icelandic Transmission System Operator (TSO); Landsnet.

Orkuveita Reykjavíkur (OR) or Reykjavik Energy is a public utility company that provides electricity and hot water for heating. It is by far the largest local provider of electricity and heating to end-users. The main service area of the company is the larger Reykjavik Metropolitan Area, covering two-thirds of the Icelandic population. Besides producing and distributing electricity, OR sells and distributes both hot and cold water (from groundwater reservoirs). Also it operates an extensive sewage system for the Reykjavik area, as well as some adjacent municipalities. OR’s power-generation plants currently have a total capacity of 435 MW. In total, OR now generates around 2.9 TWh of electricity annually.

HS Orka is the third main electricity-generating firm in Iceland. Until 2007 it was a public company owned by the Icelandic state and few municipalities in Southwest Iceland. It was later privatized and today its largest shareholder is the Canadian Alterra Power, which owns two-thirds of the company. The rest is owned by a group of Icelandic pension funds. HS Orka operates two geothermal power stations, with a total capacity of 175 MW and generates around 1.3 TWh annually. 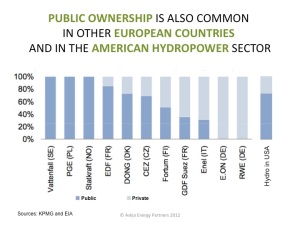 Iceland’s two largest energy companies are in 100% public ownership. In addition, there are several small publicly owned generating firms around the country.  In total, more than 90% of all electricity in Iceland is produced by public companies.

Public ownership in the electricity sector is also quite common in many other European countries. The largest electricity generating companies of both Norway and Sweden (Statkraft and Vattenfall) are owned by the government of Norway and Sweden, respectively, and the government of Denmark owns close to 70% of the largest energy company in Denmark (Dong Energy). Even in the United States, the main share of the hydropower industry is publicly owned, either by federal departments and/ or state agencies.

The reasons behind the large governmental share in Iceland’s electricity industry are historical. Ever since the early days of electricity generation in Iceland, the state and  the municipalities have always plaid an important role as providing electricity. However, the electricity sector in Iceland is open to private investment and even to foreign private (and public) investors. Couple of years ago, the Canadian private company Alterra Power became the main owner of Iceland’s third largest energy company; HS Orka. Click here for more information about the Icelandic Energy Business.

From: About Iceland, Electricity Market
← Icelandic electricity generation and transmission
The largest consumers of electricity in Iceland →