In addition, Landsvirkjun has put a figure on several other possible new power projects, that could be generating electricity within a decade or so. In total, Iceland may within near future be producing 9-10 TWh more electricity than today. This is not an exact figure; the new additional capacity could be somewhat less or even more. This will depend on the interest of new users of electricity, such as data centers, silicon industry etc. However, the most interesting option may be selling part of the new electricity production to markets in Europe. 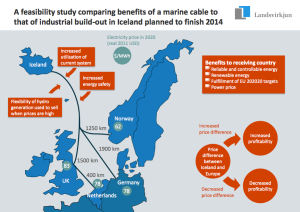 A feasibility study on a possible electrical cable (high voltage direct current cable; HVDC) between Iceland and Europe is currently being carried out by a special working group. The group includes people from the Icelandic power sector and other stakeholders, appointed by the Icelandic Minister of Industries and Innovation. It is expected that the working group will deliver its report  during next year (2014).

The high electricity prices in Europe make a cable to Europe an especially interesting option for the Icelandic power generating firms. During the last few years, wholesale electricity prices in Western Europe have often been around three times higher than in Iceland. Thus, an electric cable between Iceland and Europe could increase the profits of Icelandic power companies  substantially.

There would be numerous other positive gains from such a cable, as presented on the slide at left (the slide is from a presentation by Landsvirkjun). For example, the Icelandic power companies would be able to maximize the current capacity, resulting in more production. Europe would enjoy access to new green electricity generation, which would help the member states of the European Union (EU) in achieving climate- and energy goals (the EU aims at raising the share of EU energy consumption produced from renewable resources to 20% no later than 2020). The issues of such a connection between Iceland and Europe was described in more details in one of our earlier posts.

In the forthcoming months it will hopefully become clearer if Europe may gain access to the geothermal- and hydropower of Iceland.