Exciting times in the Arctic

Iceland has issued two licenses for oil exploration on its continental shelf and is finalizing a third license. This may lead to massive investment, with relevant projects in Iceland regarding infrastructure and services necessary for the oil industry.

Navigable shipping routes through the Arctic  would be an attractive option for shipping companies, saving them weeks off voyages between Europe and Asia. For example, the Northeast Passage reduces the route from China to Northwestern Europe from approx. 11,000 nautical miles to just 6,500 nautical miles.

Icelandic companies and governmental agencies are closely following the possible increase in arctic shipping. And thinning ice has lead to high interest from foreign countries and companies regarding the construction of transshipment port at the Icelandic coast. This is no surprise, having in mind that the possibility of using the Northeast Passage as a viable alternative to the more and much longer conventional routes (such as through the Suez Canal). 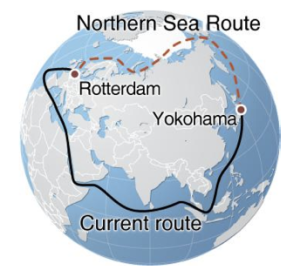 Although the Northeast Passage is faced with many obstacles (natural, political and technological) and will probably only be a minor seasonal route for years to come, this is an interesting and a real opportunity. Within a few decades the Northeast Passage may become not only an important sea-route, but even a major year-round transit operation. Wether Icelandic harbors will be an important part of this development is to early to say.

From: Engineering and Technology, Oil and Gas
← 1 GW Iceland-UK electric subsea cable may be close
Premature story in the Guardian →